CTech-LLC® acts as a supplier of Cytec’s chemical and composite materials and strives to cater desires of all clients all around the world. To this aim, we’ve provided the wide network distribution system which change the way our customers do business.

The test determines the greatest tension force (applied perpendicular to the bond) that the FRP–concrete bond can resist. The method consists of adhesively bonding a metallic circular loading fixture, also referred to as a dolly or puck, to the surface being tested. The dolly contains a threaded hole in the center that allows for attachment of the fixed alignment adhesion testing device, also known as a pull-off tester. Once attached, the tester slowly applies

tension to the bond until a partial or full detachment of the dolly is witnessed, at which point the load is regarded as the maximum bond force. The circular hole cutter is used to isolate the area being tested from the rest of the surface. This hole must be the same diameter as the loading fixture, commonly taken as 50 mm (2.0 in.).

The test procedure consists of the following steps:

The adhesive strength is determined as the maximum tensile strength applied by a direct load perpendicular to the surface being tested. The tensile load is applied by means of a defined pull head plate glued to the test area. The adhesive strength is the quotient between the failure load and the test area. On all the tests described in this paper, the test area was pre-cut in situ, fitting the size of the pull-head plates. These could be square metallic plates of 50 mm x 50 mm or circular metallic plates with diameter of 50 mm. The test machine for direct pull tensile force test is in accordance with standard requirements, with the additional feature of automatic control of the applied force provided by an attached electrical engine. 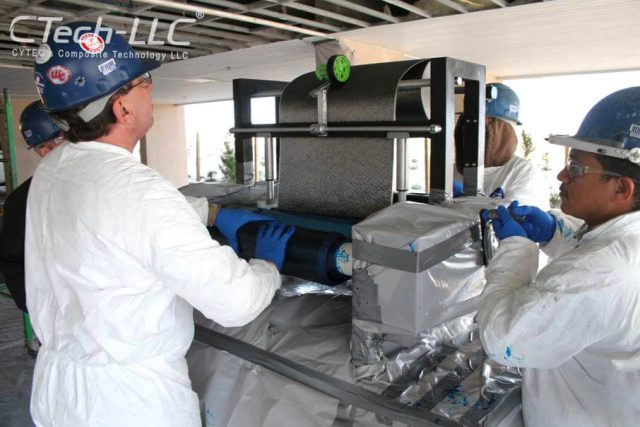 Tensile tests were carried out using a 270-kN-capacity, manually operated, universal testing machine. The specimens were loaded at a rate of approximately 250 MPa. Bar elongation was measured using an LVDT-based, clip-on extensometer with a 50.8-mm gage length. A pressure transducer was added to the hydraulic weighing system of the testing machine to permit recording load data. A displacement sensor was used to monitor the movement of the testing machine table. The extensometer, pressure transducer, and displacement sensor were connected to a digital data acquisition system, and the three channels were read twice per second. The extensometer was removed from the bar at about 70% of the expected ultimate load to avoid damage. A test was continued until the specimen fractured and there was a sudden drop in the load. Only results in which failures occurred in the free-length of the specimen were considered valid for the determination of the tensile strength. The raw load-displacement data were stored on disk and later converted to engineering units using previously established calibration relationships. These data can be used to establish the approximate rate of stretching of the specimen. shape of the curve is similar to the stress-strain curve, and it shows that fracture occurs abruptly without prior warning. Linear regression analysis was used to find the best-fit line to the points in the linear portion of the stress-strain plot, and the slope of the line is the static modulus of elasticity.

Fiber-reinforced polymer composite is created by embedding the continuous fibers in the matrix, which forms laminae. Then FRP laminate is formed by applying two or more unidirectional laminae on top of each other. These laminates make the majority of FRP products used in the construction industry. There are two ways of analyzing a unidirectional FRP lamina’s mechanical properties. Macroscopically lamina is quasi-homogeneous meaning that it has uniform mechanical properties everywhere. On the other hand, lamina is a combination of two constituents; hence at a microscopic level it is heterogeneous. FRP composites are widely used for structural applications; therefore, civil engineering is mainly concerned with mechanical properties at macroscopic level. In order to determine those properties a two-step analysis is commonly undertaken. The first step looks into mechanical properties of two constituent materials and their volume fraction by performing micromechanical analysis. Secondly, by using classic lamination theory the mechanical properties of the laminate are established by undertaking macro mechanical.

Macromechanics of a Lamina

FRP lamina at this level has different elastic modulus, shear modulus and Poisson’s ratios which vary with direction. It is because of different mechanical properties of the fibers in a longitudinal direction in comparison to other two orthogonal directions. Therefore, unidirectional FRP lamina is taken to be treated as an orthotropic material.

Micromechanics of a Lamina

It has been said that FRP lamina is heterogeneous, which means that it is formed from two constituents: a fiber and a polymer. Hence, the mechanical properties are obtained from those two materials and their volume fraction. Considering the local stresses, deformations and interactions of fibers and a matrix, the micromechanics approach is undertaken in mechanical properties determination. There are many of them available, but only two are regarded as simple and hence are used widely: